August 28th 8:26pm
Wow,I did it,well,not totally yet but almost. Never been satisfied with a show until now.I'm in the breezeway with my girls listening to my radio. I still listen to the radio. Oscar Peterson playing.I think about all these famous people and famous quotes. The one that sticks in my mind tonight is Edison. Thomas Edison. I don't have the exact words but something like the day you quit,success might be the next day.something like that. I didn't give up this summer. I kept going 100 degrees in the garage and I kept going. I just wanted to paint my pictures,paint paint paint. Paint on the sink,my hair,Matilda Jane. 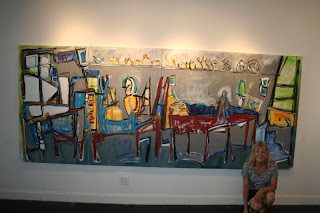 Just wanted to paint my pictures.
Posted by Lydia Hamilton Brown at 5:40 PM No comments:

August 27 at 8:27am
Just made it! I picked up a certain color paint I needed for Cezanne's Studio and had to get on the deck before the rain. Hope it's done this time. I'll know better when I get it to Highwire. doesn't look like weather is going to cooperate but as long as there is no wind. I have another I'm starting and 3 to finish.
Probably all won't go in the show,never know. A friend said,your focused! Focused for sure. When I looked at a painting yesterday of Cezanne's I had this flash of one of the first art books I had. Sometime when I must have also gotten "The Artist in the Studio". "Art Appreciation Made Simple" It had this painting of a mountain on the cover and a sticker $1.95. There is was yesterday,that mountain. And here I am today.I think I wanted to live in a sewer in France back then,anything to escape the mundane.
This artist life was for me! I overhead some egghead make a remark about a painting yesterday. Oh,she says "He's just a copycat". Aren't we all? Sun is out again but I'll stay in the garage.
Posted by Lydia Hamilton Brown at 5:43 AM No comments: 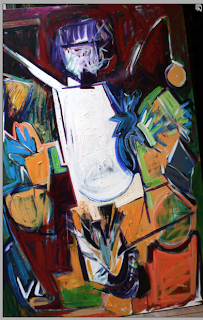 Okay,no date,no nothing. I have accidently deleted my blah blah of my incredible weekend, So, this is "For Derain"60"x 72"and the first painting I did for my show. What I wrote in my deleted mess was I had to go to the museum to look at his painting which I saw but didn't realize it was his. It was my favorite in the "Arcadia" exhibit and I had already done at least 5 of his studio.The comment was he swam upstream.Swam upstream. I love it. Found a great book about Kandinsky.Had a beer and cheese crackers. Anyway,then went to the Barnes.Me,the one that thought moving the Barnes was a travisty,have been there 3 times this month. Had to get this super membership which lets me in anytime. Checked out the library.Then my new best friend Cezanne. I 'm almost finished Cezannes studio.All 12' feet. I worked most of the day yesterday,on the deck. I'm excited. I haven't worked this much in years. I've missed it.Anyway,I'm on the deck now thinking about the movie I watched last night. The Razors Edge. I wondered as I watched why people,including myself,get so lost. Lost in all the crap of the day. I don't feel lost any more. I just let other people get in my space. This person I am now is all I ever wanted to be,why some people think I should have been something else I'm not sure.I'ts been like Derain,swimming upstream!

Posted by Lydia Hamilton Brown at 4:06 PM No comments: 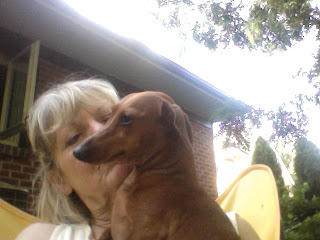 Well,I'm back. I wanted to save my return to the blog until my new show was up but too much has happened and I really didn't feel like it until yesterday. I was at a meeting and a friend came up to me and said some truly  beautiful things to me. This was my response. I told her I decided that this summer I wanted to see what my potencial was, I wanted to see if I could reach back and realize what I was capable of doing. I spent the entire summer on developing,creating and working on my painting. No tricks,no cutting up. If something doesn't work,no trashing.Working it out,frustratedsometimes but having the courage to keep it going. I did go to the sea in June to prepare my head. Alone,looking at the water and walking, breathing. Only a few weeks left of school and I took off. Felt good. Anyway,all the drawings and collage I had done at Highwire had to somehow guide me. For the first time in a  very long time I knew I could do it. I finally had confidence in myself. I had Ginny! When I picked her up at the shelter I told her SHE was the first thing I ever did on my own. No asking advice from anyone. I wanted her and I got her. All by myself. She had a terrible accident a month ago and had 2 surgery's. I couldn't imagine what I would do if something happened to her.
Back to the painting. Up every day at 4am. My studio is in the gargae now. I can work better with the dogs around  me plus I think the basement is creepy.Like you have the weight of the house on you and you can't breath. I went to that book. The Artist in his Studio.I took it every weekend to Highwire.Cezanne's studio was the first. Hard to believe I worked on that image over a year. I memorized it so that when I started the painting I knew how I wanted it to look. It's 12ft long. Got it togther in 4 days. Hauling it back and forth to Highwire so I could see the scale.I never really liked Cezanne or should probably say never paid much attention. Now,well now we communicate. Come Cezanne,from your grave give me a break!He had a long shelf in his studio and a big ladder to reach for his things. I understand it now.I have one more big piece to go,72"x 180".I not sure what will go on that one.
Posted by Lydia Hamilton Brown at 4:45 AM No comments: