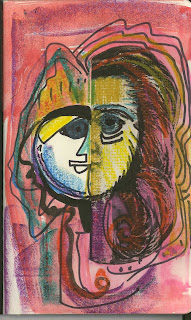 April 28th 6:35 am
Everyday I work in some way on the notebooks. None are finished and what do I do ,go and start another. I couldn't figure where to put the poems.I had this book on Picasso portraits so I cut all the faces in half,the way I started the "Self Portraits from the Black Hole" so I cut all the faces and glue them in the book . Worked on one ." Homage Picasso, poems from the Black Hole"
So they are dark,what's the crime in that.
A bed
is too small for two
even if
when I think
it's a magic bed
I have dreams in it
dreams like
a true King
under his canopy
with his queen beside
in a magic room
arrested in space
like a bird on a rainbow
It is dark
I cannot see the walls
Keeping my balance
by holding Satan's tail
dragging me downwards
my thoughts are grave.
Posted by Lydia Hamilton Brown at 3:35 AM No comments: 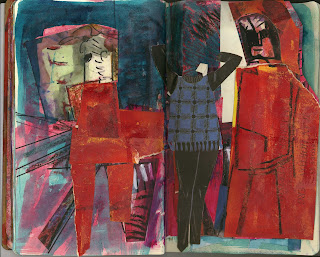 April 26th 6:28am
Been working on trying to finish all the notebooks in the little tangerine boxes. Have about 10 more of the visible boys airplane adventures but he will just have to wait. I want to finish his notebook "Wonders Never Cease" and "The Book of Secrets ",the story of the cheerleader. Having trouble with this one so took out a few pages,cut them down and re glued. I am working from the original model and I have to take some more pictures,kind of like flat stanley. This will be flat cheerleader HA! This one is 2 together with a paper doll costume in the middle. It's 8"x 10" the painting will be 2 canvases 60" x 72". I can see it that big.
I'm adding poetry to my notebook about stairways
I trudge on and on
I drag myself upward
Under my feet
My pace is slow
I can hear
Above my head
The hovering seagull
it's cry falls on my ear
To the right
Black - desolate
road threads upward
All entangled.
I have to get out my typewriter I have to get out my typewriter is not part of the poem. Just so you know.
Posted by Lydia Hamilton Brown at 3:28 AM No comments: 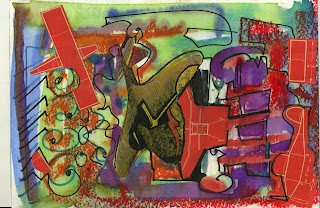 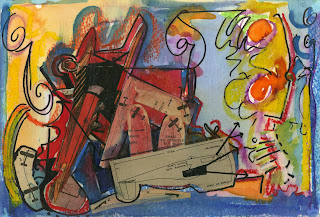 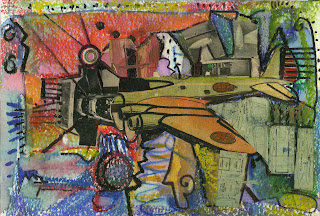 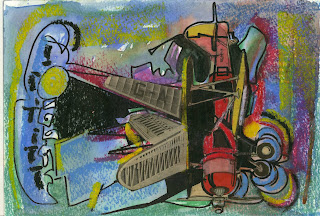 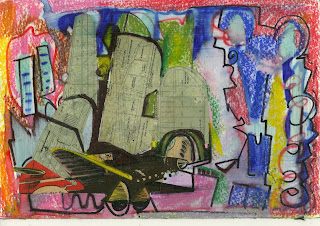 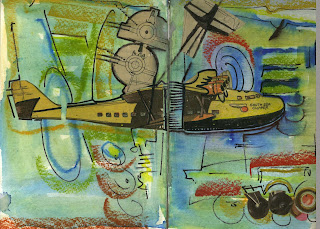 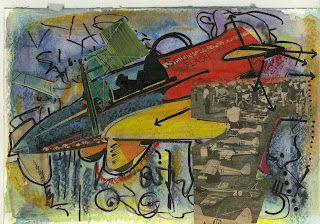 April 25 9:05 am
I finally figured out where my ideas come from. They are found,just like found objects. I was looking through this old book I picked up at a flea market and one of the pages had airplanes glued down. They were old and from a newspaper. Carefully I lifted them out and saved them in a box. Working on my website I thought, the visible boy,he has a plane! So now he can have adventures. That's how the process works. I had a watercolor notebook so one page at a time I painted a wash with my new crayola deluxe paint set, added marker and sharpie pen. I then glued a plane. Have about 8 finished. I'm going to paint each one 36"x 48". found more in the same book so I will have about 15 paintings of "The Adventures of the Visible Boy"
All of the disgusting stretchers are gone. Yesterday I cut up "The Sound of Many Birds".I glued the birdies on 6" x 12" canvases. Not sure what will happen.
Posted by Lydia Hamilton Brown at 6:06 AM No comments: 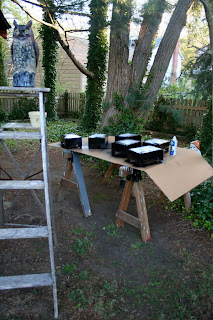 April 12 7:10 am
I always enjoy finding exactly what I need in the global trash heap. I need to spray paint my clementine boxes for my small notebooks and I have to take the spray as far away from the house as possible (don't want those Star Wars guys riding around with me again). I found 2 saw horses.
in fact,they were next to my truck when I came out of work. Who could resist? Anyway, got them well back in the yard with a big piece of cardboard on top and the first coat of spray has been applied. I also found several ski poles and skis and a bag of neckties. I 'm thinking of making a giant shaggy dog or a yak.
Posted by Lydia Hamilton Brown at 4:10 AM No comments: 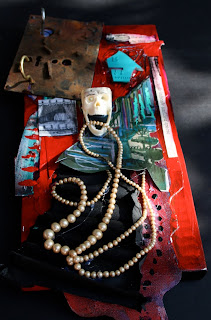 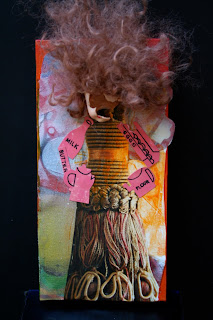 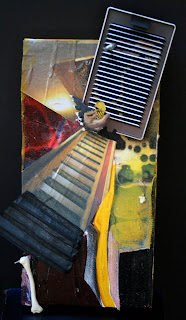 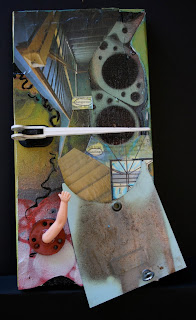 April 10 10:35 am
What a morning. Been up since 5 am and finished and photographed a bunch of work for my soon to be published website. Wow,a website. I went to Highwire yesterday and worked in the quiet of the gallery to finish my notebooks, which will probably never be finished. It's exciting when you take a break and then come back with new energy. Anyway the website has the little visible boy directing traffic. It's fun. Just think,you work all your life or you try to because that's all you know to do. sometimes it's good sometimes not, but it's always there. It's always there calling,challenging,disappointing but a constant. Wake up in the morning and art,my friend and worst enemy is always there. I was asked this morning why I don't write about my friends. Why don't I include all the everyday stuff. Why don't I list the credits,like a movie. I don't know,maybe cause at the end of the day my table isn't set for dinner,it's covered with stuff I make.
Posted by Lydia Hamilton Brown at 7:35 AM No comments: 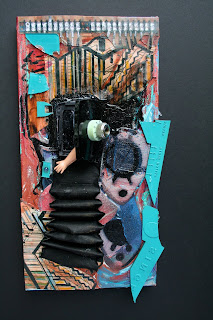 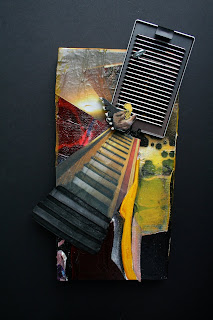 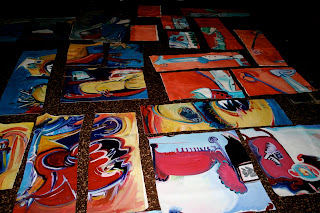 April 9th 8:58
Where have I been? Well,got those art cards in the mail. Had to deal with that evil person who screamed threats on the phone and then, the rains came and the flood and the disaster and then I saw Picasso and he spoke to me and then I watched Jackson Pollock and I went to NYC and ate a very expensive lunch at the met and then came home and went to a party with lots of old people and then work and Highwire and went back to the basement to look at the flood and that is when
I thought "WWJD" what would Jackson do? He would have a drink and figure it out!
3 bookcases had to be moved,2 trashed and lots of books to sort. Gave away bags of books.Took doors off hinges and trashed. Then I had to deal with the canvases. All stretcher bars were wrecked and every painting had to be taken apart. I laid each canvas on the floor and cut them up.
I folded and cut folded and cut. I didn't want to end up with a bunch of random pieces so just kept folding. some of these guys were 6 x 6 feet. I bought small pre stretched canvases and glued some of the pieces on the surface. Went back to my notebooks and included some of those scraps.
I have 7 notebooks all in their very own clementine box. This way If i want to show them they can include all the stuff that goes with them.
Posted by Lydia Hamilton Brown at 5:58 AM No comments: