THe Ace of Pentacles

December 23 2019
It's been a long time since I wrote. I always started with pulling a card from the Tarot deck
so here  we go............it is the ACE of PENTACLES.This is a good card. I took a class in how to read the cards intuitively.  you interpret what you see ,its all good in this one.
So why now. No sure. I just read the posts from so many years ago. How the hell did I survive all that crap? It's almost as though it never happened. Like a whole big chunk of my life just went puff  and disappeared.  Mom's gone. I thought I would never recover. I remember the first Christmas after she died I made an arrange of greens to take to her grave. The only thing I had on hand for a container was a big wooden shoe. Ridiculous. Who puts a wooden  shoe filled with tree limbs on their mother's grave.I'm going to visit. Haven't had the courage but a very sweet person as offered to go with me. You know what? No one ever has. I hope I don't go kablooey. I'm sure not taking a shoe He'll think I'm a nut!
I do remember going to a cemetery  in Taos,  New Mexico. It was on the rode to Taos Pueblo.
There were wooden crosses and all types of things on the graves {I have to get my dictionary out,
always wrote with the dictionary because I can't spell} anyway I will take something of mom's to place on her stone. I haven't seen the stone but it is supposed to look like my father's. I picked his out.Pink stone with roses. I'll take something of his or maybe I'll get a cigar. This is good . I have a plan
As far as the rest? Katie is gone, Lucille,Polly . Polly dies in bed and the radio was playing Waltzing Matilda. So............. Matilda was born the day Polly died. Still have Ellie. There was Ginny .Ginny
was a rescue and had lot's of issues but she was a sweet little dachshund.I held in my arms wen she went into cardiac arrest and died. Now it's just me,Matilda and Ellie. We'll be just fine/ 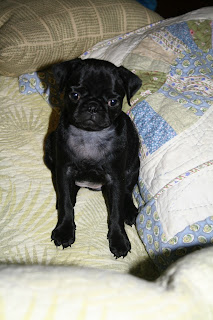 Matilda as a child 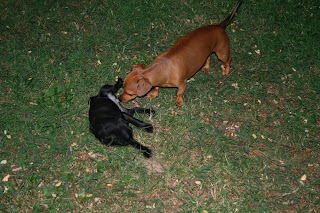 
Posted by Lydia Hamilton Brown at 9:34 AM