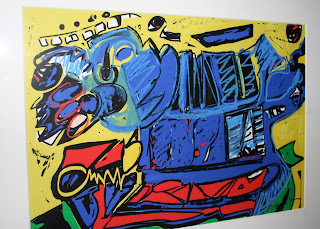 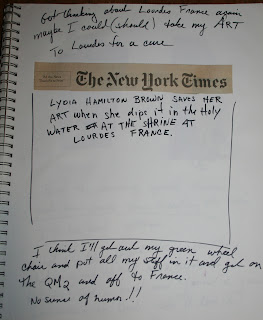 Jan 24 4:37 am
Back to a notebook from 2004. this page is so ridiculous
I had to take a photo. I love "The Song of Bernadette"
The book Franz Werfel,a worldly man,a European Jew who would drink from the spring at Lourdes everyday praying for a miracle I guess because he was trying to escape with Alma Mahler,European wench who was carrying Gustav Mahler's musical scores. Franz vowed if he ever got out of Europe he would write the "Song of Bernadette" He did and Alma took up with Klimt or Kokoschka or was that before Werfel. Who knows.
2004 was when I started to use the computer. I drew kitchen tools and would work over and over just trying to learn all the effects. Printed then then either drew or used them in collage. It certainly turned out to be a very minor phase although I did win a prize from the Fellowhip of The Pennsylvania Academy. That made it worth it. I drew a toaster,turned it upside down and it became a dog.
Posted by Lydia Hamilton Brown at 1:37 AM