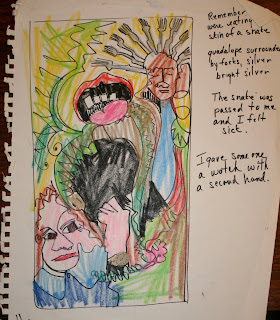 Jan 26:6:53 am
Again,the tarot card of the day is the Tower.
Strange it came up again. I didn't explain. It's represents ambition. Ambition which leads to conflict and strife. A tower is built high and into the air,a symbol of personal drive and ego. Goals lie in conflict with powerful surrounding forces and forces of nature.
Well I know I'm ambitious. I also know when something or someone gets in the way there is conflict. I have to think about this card.
I found another notebook that I wrote all my dreams in. I painted some of them. some are just drawings. I was thinking about this book last night. I have lots of nightmares. I started writing them down when I read somewhere that Margaret Mead put an easel in her daughters bedroom so when a nightmare woke her up she would draw what she saw. Hey just walked across the street and picked up a child's easel. You non -believers it must be a sign. think I'll try it.
Anyway,the dream diary I found,of course,has no date but since it's ongoing doesn't much matter. Oh my,here is what I wrote on the first page. I also made a drawing.
"Remember that they were eating the skin of a snake. The Guadalupe was surrounded by forks. Bright silver forks. I gave someone a watch with a second hand. The snake sken was passed to me and I felt sick.
I had a entire show of these paintings. A writer asked "Who would ever buy such paintings"
I remember telling him Ozzy Osbourne.
Posted by Lydia Hamilton Brown at 3:53 AM