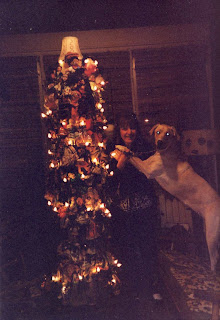 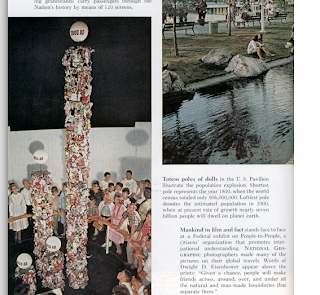 Dec. 31 8:26 am
It's New's Year's Eve. The Tarot card of the day is the Tower. Strange that I saved writing about my Tower and I picked the Tower card. It isn't the best card so I'll save the explanation for tonight. For now, the story of my tower.
When I moved to my house with no furniture I did have hundreds of old National Geographic magazines. In fact,it took 2 wagon loads to get them from my neighbors trash. I would sit with them in a corner of the back of the house and cut them up. I never went in the yard at that time. so,day after day, I would cut all kinds of interesting pictures out and save them in plastic boxes.
I found one about the 1964 World's Fair and this photo of a tower of population intrigued me.
Okay, since it was 1999 and the year 2000 was a big deal I will recreate this tower. I decided to assemble the structure at my old house. The base was a large 4 x 4 ft piece of plywood. and the tower made of chicken wire that I wrapped around several times. God the thing was huge! And,
rather heavy,in fact heavy and top heavy. No problem, I will cover it with the people of the world and all will be fine. Okay,now where do you find hundreds of people of the world dolls?I
searched flea markets, thrift shops everywhere I could think of and began to wore them on as I collected them. My idea was to display this in a gallery but the thing got so heavy the more people the weight grew until I simply could not move the thing. Who cares! I was determined to finish. As time grew closer I became desperate so add a few trolls dressed in foreign costumes. From the picture, the light at the top seemed to be a big globe of some sort so instead I place a lampshade with 2000 written on all sides. For the lighting ceremony I wore an outfit with the Eiffel Tower,seemed appropriate. My mom took our picture. Ah,one of those great moments of history.
Posted by Lydia Hamilton Brown at 5:26 AM